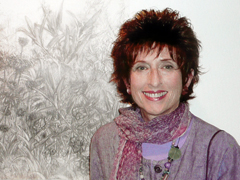 ARTIST STATEMENT – In my drawings and paintings, flowers are metaphors for life and death, beauty and decay, the passage of time, and the gradual disintegration of human flesh, bones and organs. Using only live flowers, which are constantly changing as I work both in my garden and in my studio, I depict botanical forms in various arrangements and states of decay, often combining botany and anatomy to symbolize mortality.The resulting hybrid imagery explores the metaphysical relationship between flowers and flesh, and I see therein a mirror image of myself and the world around me.

The themes and poetry of the Hebrew Scriptures continue to inspire me. Psalm 103 resonates in particular: “As for man, his days are as grass: as a flower of the field, so he flourisheth… for the wind passes over it and it is gone.”

BLOOMS THAT FLOURISH AND FADE

Not too many serious painters use flowers as subject matter anymore. They’re too trivially pretty to be of much use to the punchy, decadent crowd, and they’re too insipidly organic for the new abstraction contingent.

As metaphors for the transience of life, however, flowers stood the sixteenth and seventeenth-century artists of the Netherlands in good stead. For thoughtful artists whose view of the world doesn’t need Eve-of-Destruction symbolism, floral imagery may still be a useful vehicle. In Carol Goldmark’s work, flowers offer a spiritual dimension that joins comfortably with her ultra realist style.

Goldmark’s recent drawings and paintings of flowers, on view at the Orange County Center for Contemporary Art, represent a brave step forward from her previous efforts, which had the delicately painstaking, but anonymous, look of botanical studies. Still operating within the compass of a highly detailed, expository approach, she is now allowing her fidelity to raw data to be colored by personal, emotional values – which are in turn given point and premise by Biblical references.

The best pieces in the show are a pair of graphite drawings, Stillscape/Days Are as Grass #1 and #2. (The reference is Psalm 103:15: “As for man, his days are as grass; as a flower of the field, so he flourisheth.”) One drawing shows a huge, uprooted stalk with voluptuous, exhausted petals that sag like parched tongues. Other petals float weightlessly in the air; still others appear to parachute downward. Goldmark’s quietly self-effacing lines probe the contours and depths of these blooms with a surgical precision.

In the second drawing, blooms are torn apart and scattered across the sheet as if by a vengeful force. Some of the flower fragments are airborne-one zooms across the flat whiteness; another hovers, butterfly-like, in dead white space. A large, tousled blossom shows a darkly complex interior; in serene contrast, a furled calla lily sits, unblemished, in a corner of the paper, suggesting a symbol of steadfast faith in the midst of adversity.